We left off ‘Part 1’ at the point where I had finally acquired my first, state of the art Mac computer, however, as I had never used one at college or professionally I had no idea how to switch it on.

This, the second and final part of the tale how I initially out of necessity, then out of preference created imagery in an analogue fashion also looks at how everyday working practices in 2012 were a distant vision on the digital horizon as recently as the late 90’s.
If you haven’t yet read ‘What’s A Computer? Part 1’, it can be viewed by clicking HERE.

The kit pictured above, whilst not being worth a carrot now (I actually saw one on eBay today going for £8!), was the must have set up for any budding designer in 1995, so I either had to learn how to use it quickly or get somebody involved who was already versed in the finer points of the Apple desktop revolution. As you can imagine, such candidates were few and far between in 1995 – but enter the soon to become Microdot digital guru, Matthew Sankey. I had met Matthew as far back as 19th November 1988 in the back of a transit van on our way to Hartlepool to watch Wigan Athletic play in an FA Cup match. We hit it off and became friends immediately. As luck would have it, Matthew completed a Mac based desktop publishing course at Blackpool College in the early 90’s and was looking for work. An important part of the work ethic here at Microdot is, if you’re going to spend upwards of 8 hours a day in a room working together – you better get along! Matthew and I got along, he knew how to operate a Mac, I had one, and the rest is history. I am not exaggerating the point in stating, I simply could not have done it without him. He informed me last week that the first Microdot sleeve to be digitally delivered to the printers was ‘Roll with it’ by Oasis. Now a very important distinction must be made here, whilst the artwork was committed to disc and delivered digitally (as 0pposed to being pasted up in the traditional fashion using knives and glue), the creation of the front sleeve image itself was still completed without the aid of any digitisation.

Oasis – Roll With It

The colour effect in the Roll with It sleeve was not achieved by Photoshop manipulation but by a technique known as ‘cross processing’. The technique involved shooting the scene on negative film and once sent to the lab for processing, they were asked to develop the film as if it were transparencies/ slides. The effect of putting the film through the wrong chemical process would distort the colours. To illustrate the point, below is a shot taken on the same day using film processed in the correct manner.

Oasis – Roll With It out-take, click image to enlarge

Despite Microdot now being in possession of ground-breaking Californian technology, physically delivering artwork or having it approved posed massive problems. The internet was still in its infancy and emailing large files was all but impossible. In the clamor for high tech hardware, I had forgotten to invest in a basic fax machine. Subsequently, whilst working out of the 1995 Microdot HQ (my bedroom), Matthew and I would have to print off all sleeve artwork, press ads, posters etc and I would literally walk 1/4 mile to a local stationers and pay them 50p to fax (!) our digital creations to the London based record companies for approval. Once approved I would then either have to send by courier or hand deliver in person myself, the digital files on disc to the capital, 200 miles from where we were based. As mentioned in part 1 of this article, the visionary that is Alan McGee at Creation Records had advanced me a lump sum to enable the purchase of the new computer equipment. The change out of the £10,000 he gave me, then enabled us to move the entire operation down to London to be in close proximity to our clients. 1996 saw the beginning of a new era at Microdot. We had dedicated design studio premises in the soon to become trendy Shoreditch district. We even went crazy and bought another Mac!

Pictured above, the now legendary London based Microdot HQ, Circa 1996. Matthew can be seen sat in front of then recent acquisition, the second Mac. Behind him on the phone is another Microdot stalwart, Martin Catherall, a 1996 edition to the team, Martin too was Mac literate with a particular penchant for Photoshop. The first totally digital piece we ever did was the LP ‘Fuzzy Logic’ by The Super Fury Animals. I was given a copy of some black and white passport photos of the infamous cannabis smuggler, Howard Marks to be used somewhere on the interior packing of the album. On returning to the Microdot HQ and after a discussion with Martin about the digitally enhanced possibilities for the images, he set about creating the now iconic sleeve.

The image above of the finished sleeve shows the results of Martin’s digital noodling. Whilst I was at the time, and in fact still am a huge fan of the sleeve, it was no substitute for ‘getting your hands dirty’ and organically, physically constructing an image. No better example of how a sleeve could have been Photoshopped together in considerably less time, with considerately less expense is that of ‘Be Here Now’ by Oasis in 1997. When Bonehead somewhat jokingly suggested placing a Rolls Royce in a swimming pool (in homage to Keith Moon’s alleged submersing of the iconic car) as a potential sleeve image, I set the wheels in motion for what was to become a huge logistical undertaking. 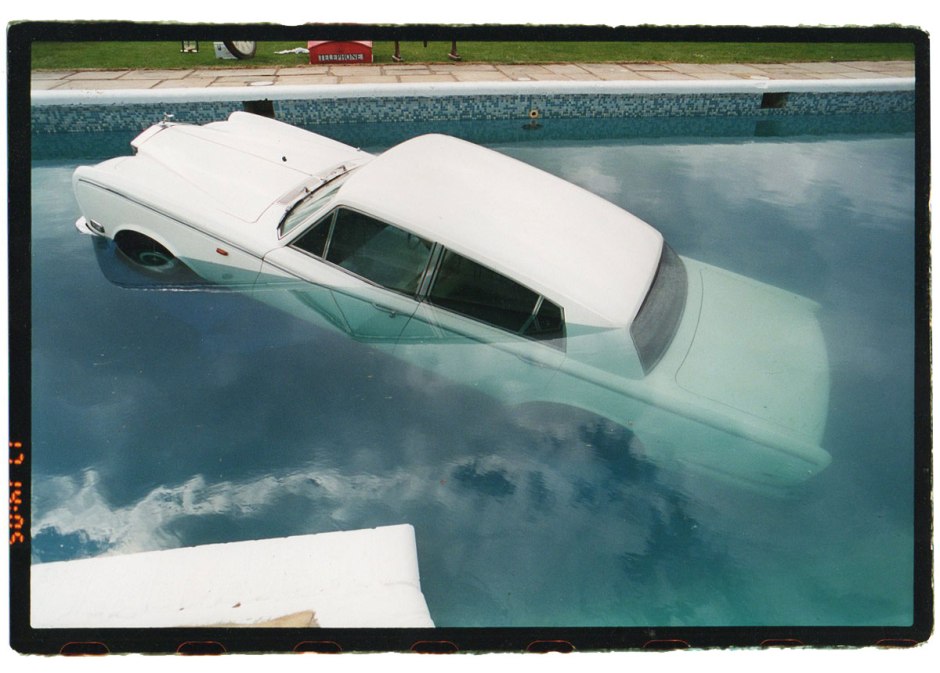 Rolls Royce in swimming pool, on the shoot for ‘Be Here Now’

Everyone is aware that Rolls Royce cars, even old ones, cost a lot of money. Whilst Oasis were very successful even they weren’t going to waste tens of thousand of pounds trashing a vehicle. So the first of many problems to be solved was to find a Rolls Royce for next to nothing that looked in top condition! The model used in the end was sourced from a scrapyard in Leicester, it had no engine and was basically just a shell. Then we had to find someone with a swimming pool who’d let us stick a Roller in it. I have to admit, this one stumped us and we resorted to the services of a location finding company – something I had never done before, or since for that matter. They came up with the goods though and we set off for Stocks Hotel in Hertfordshire to do some test shots. The hotel was once the home / party HQ for Victor Lownes, the head of Playboy Magazine in Europe, the parties he held there were legendary and outrageous. All that was left to do now was to figure out how to get a two ton car into a pool, photograph it…. then get it out again.

I commissioned the services of a group of expert set builders I had met on the London film making circuit, we drained the pool, hired a huge crane and built a scaffolding gantry beneath were the car was to be positioned. The scaffold was wrapped in blue tarpaulin to mask it in the shot and the beast that was the Silver Shadow was lowered into place. I was in the hands of seasoned professionals and thought ‘What could possibly go wrong’. Initially nothing did, then on re filling the pool, an overnight job, the supporting base began to creak and the car listed about two feet to one side. I began to panic as this was the kind of shoot you only got one go at, my anxiety was increased as telephone calls of complaint flooded in from the local village that no one could flush their toilets or obtain any running water as the drain on the local supply was so great to fill the pool. I decided to go to bed before I had a heart attack. When I woke the following morning the car was still ‘afloat’ and the local population had their ablutions restored. Looking at the shot now it strikes me that it does indeed look Photoshopped as the car doesn’t look big enough.

The ‘Be Here Now’ experience is an extreme example of creating imagery for real over digital enhancement and one that will probably never happen again in terms of record sleeve design, but it was a challenge, that’s for sure and great fun to boot.

Since the heady days of Oasis in the mid 90’s I have continued to produce works that have involved computers as a final production tool, but wherever possible I have returned to my pre digital roots to create, what I think at least, are interesting images using traditional methods. So the moral of this tale, if there is one, is by all means embrace the latest computer hardware and software technology, but always keep a tin of glue and a scalpel handy.

To see the work of Microdot, done both with and without computers, go to – www.microdotcreative.co.uk